Miramar College basketball player Cameron Barry has quite the college athletic experience to share. A road rarely traveled. One that saw the 22 year-old from Santee, CA complete 30 units during the spring 2022 semester and obtain two degrees from two different colleges at the same time.

It’s not often you find a scholar athlete secure his associates degree within the same year he secures his bachelor’s degree. In addition, rarely do you see that same athlete then sign to play Division 2 college basketball. Yet, this is the reality of Cameron Barry.

On May 17, Barry was named the 2022 Pacific Coast Athletic Conference (PCAC) Student Athlete of the Year. He was honored for his 4.0 grade point average and his completion of 80 units over 3 years at Miramar College.

Barry also dazzled on the court where the Jets point guard was a two-time All-Pacific Coast Athletic Conference First Team selection. He leaves Miramar College as the school’s second all-time leading scorer, the career three-point leader, a six-time PCAC Player of the Week and holding the record for most three-pointers in a game with eleven.

How did all this happen you ask? Here’s how!

Barry graduated from West Hills High School in Santee in the spring of 2018. Not wanting to lose his enrollment status at SDSU, his parents encouraged him to enroll in the fall 2018 semester on a part-time basis. His intention was to walk-on to the Aztecs basketball team. But, Barry realized he’d rather play then sit the bench as a walk-on and therefore he also enrolled at Miramar College with the intention of starting to play during the 2019-2020 season. To maintain his college basketball eligibility, Barry decided to grey shirt.

The concept of “Grey Shirting” is designed for college freshman to postpone their full-time enrollment in classes until the second term of their freshman year. The NCAA eligibility clock for a student athlete begins the moment they take 12 or more units during a semester at the institution they are playing at. The NCAA allows college athletes five years to complete four years of eligibility after initial enrollment.

NCAA eligibility also loosened a bit during the COVID-19 pandemic allowing an athlete to extend his/her eligibility beyond a 5th year. To further complicate matters, the 2020-2021 California community college basketball season was cancelled due to the pandemic and all  student-athletes playing in the state had their eligibility paused for a year. This all meant that Barry could keep playing basketball for the Jets while attending SDSU and maintain enough eligibility to continue to play at a 4-year university.

Got it? We know, it’s complicated! Just let the counselors, compliance officers and the NCAA Clearinghouse deal with it. That’s what Barry did while concentrating on his studies and his game on the court.

How did Barry balance it all you might ask? It wasn’t easy. “It was all about time management,” said Barry. “At San Diego State they allow you to take up to four leaves of absences, so I strategically took two of them during my Miramar basketball seasons. That is how I stayed on track. I took half my units there (SDSU) and the rest here (Miramar College) and they transferred right over.”

Barry lives with his parents in Lakeside/Santee, smack in the middle of the SDSU and Miramar College campuses.

This past spring, Barry completed his 12 units at Miramar to remain eligible to play while completing another 18 units simultaneously at SDSU. “Thirty units in one semester was challenging,” said Barry. “My first year, I would come up to Miramar for practice in the morning and then drive to SDSU for classes from noon to two and then come back to Miramar in the afternoon. I did that 4 days a week. Then COVID came and everything went on-line and the struggle get to campus was no longer an issue”

Cameron Barry is not done yet. He recently signed to play Division 2 college basketball at Cal-State Dominguez Hills in Carson, CA. Barry will have two more years of eligibility and his scholarship will cover the cost of his graduate degree. Barry will study education curriculum at Dominguez Hills.

“He is a phenomenal human being,” said Nick Gehler, Miramar College head basketball coach and athletic director. “It was amazing to see him work so hard for us, both on the court and in the classroom, and then realize he was also a student at SDSU. Truly amazing accomplishment." 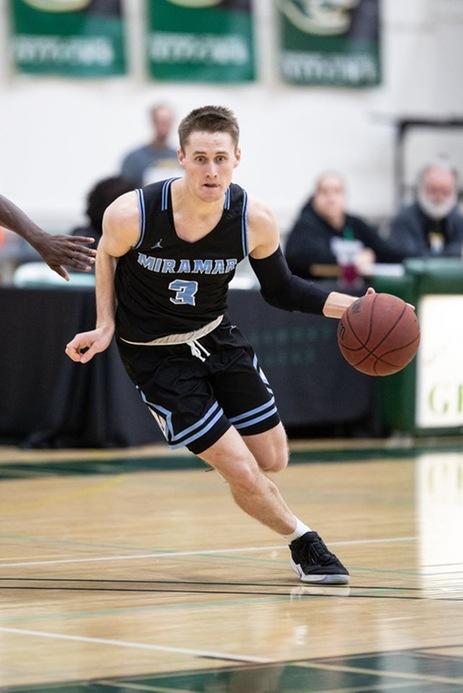