Chances are you have heard the term “soccer mom” before as a reference to the minivan-carpooling, sideline-cheering, orange-slicing mother of kids who play soccer. At Miramar College, we define it in its truest sense by introducing you to Brandi Mitchell. At age 45, Mitchell is the newest member of the Miramar College women’s soccer team, as well as being the mother of two grown children. A quarter century removed from her high school playing days, Mitchell is giving it another chance in college athletics. “I am at a place in my life with plenty of game time in recreational leagues, but I hadn’t had any training since I was 17 years old, and I wasn’t getting any better,” said Mitchell, who runs an organization called San Diego Soccer Women, which advocates for women to play soccer at older ages.

As a result, Mitchell decided to sign up for the College’s summer women’s soccer class. That is when she realized there was an open spot on the intercollegiate team for the fall. “I teased, ‘Haha, I should play,’ and the coach told me that if I follow the governing body rules (of California JUCO soccer), I could.” That meant enrolling in college classes full time and passing all the qualifications. That is exactly what Mitchell did after careful self-reflection. “I just kept thinking, ‘I can’t even imagine playing at that level, but if they are willing to take me, I also can’t imagine not going forward with this opportunity.”

A month after reaching her decision to play, Mitchell is not only the Jet’s starting Center Back, but she was recently named team co-captain. “Being older and having all this experience within the game gives me a little bit of an advantage.” While the Jets are winless, and have been outscored 35-0 over their first five matches, Mitchell has started every game to date and has never come off the pitch. With only 14 active players on the roster, being able to push through all 90 minutes is almost a requirement.

A quick perusal of the Jets roster finds Brandi Mitchell listed as number 22 and as a freshman midfielder from Simi Valley High School. Brandi Mitchell was once a promising young college prospect recruited by the Air Force Academy and Pepperdine. However, an injury during her senior year, her parents divorcing and financial issues sidetracked her soccer career. She returned to the game in her late-20s in Poway’s recreational women’s outdoor league, fitting Saturday soccer games into her life as a mother of two young children and a business owner. “I tend to have a higher fitness level for my age because I play so much recreational soccer and get out on long canyon hikes every day.”

The pandemic even played a role in her pushing herself to the next level at Miramar. As a local community leader for women of all ages in soccer, she started free soccer classes at public parks to provide skills training, workouts and social connection to players while leagues were shut down. Combined with changing to a plant-based diet, coaching these sessions motivated her to lose 25 pounds thus preparing her for the athleticism she would need to play with women more than half her age in the college season.

Brandi fits in extremely well with her much younger teammates. There was some apprehension on her part about the social aspect of interacting with late teens and 20 year-olds, after all, Brandi does have a 21-year old daughter and an 18-year old son. Opponents might never realize how old she is until they get up close and personal with the 45-year old on the pitch. “Sometimes I wonder if players and their parents are whispering on the sidelines when they see I am an older woman, but, when I am going for the ball, I’m being hit just as hard as the other players, which I appreciate.”

This is where we connect even more to the “soccer mom” part of our story and possibly circumstances never before seen on the collegiate level. As Brandi Mitchell refines her passing skills on the field at Hourglass Park, she often hears the whistles from the nearby pool, where her 18-year old son, Maverick, is a freshman athlete on the men’s water polo team. Brandi convinced Maverick to take Miramar’s water polo class over the summer to start the transition from high school graduate to community college student after the pandemic lock down. “I said ‘you need to get out and meet people again after a year of doing high school remotely’ and I actually registered him for the class.” Maverick took his mom’s advice, enjoyed the summer water polo class and has now earned the starting goalie spot. “My mom has played soccer all her life, she just loves to play soccer,“ said Maverick Mitchell. “But for me it is super weird because it is my mom. I didn’t know she could do all this at this level.” According to Maverick, all his teammates think mother and son in the same athletic department is “pretty cool.”

In order to qualify to play intercollegiate sports at Miramar College, students must take 12 units, 9 of which need to be academic and be in good academic standing. Brandi Mitchell completed her bachelor’s degree and masters coursework in International Policy Studies and French at the Middlebury Institute of International Studies at Monterey in 1999. Her skills in small business and non-profit management are getting a boost for the fall semester with 14 units of classes in Microsoft Excel, QuickBooks, Accounting and Nutrition. Yet another link between them is that Brandi and Maverick are both enrolled in the same Microsoft Excel course. “It is actually helpful because the other night I was already in bed then he reminded me that our homework was due at midnight,” said Brandi Mitchell. “Being in the same class has already had its benefits since he is used to the ins and outs of online classes and I’m just the mom who reminds him to do his homework!”

The two often cross paths in the training room, weight room and sometimes on campus. “I once saw him on campus with his teammates at the start of the semester and I loudly yelled ‘Hey, Maverick’ dying to see his reaction, and he actually chatted with me and didn’t pretend not to know me.”

As for the future, Brandi will have one more year of eligibility, “I laugh all the time at how amazing it is that I had missed out on my dream of college soccer 27 years ago and here I am now at age 45. A missed opportunity has turned into a once-in-a-lifetime experience that I am just going to enjoy in the moment.” 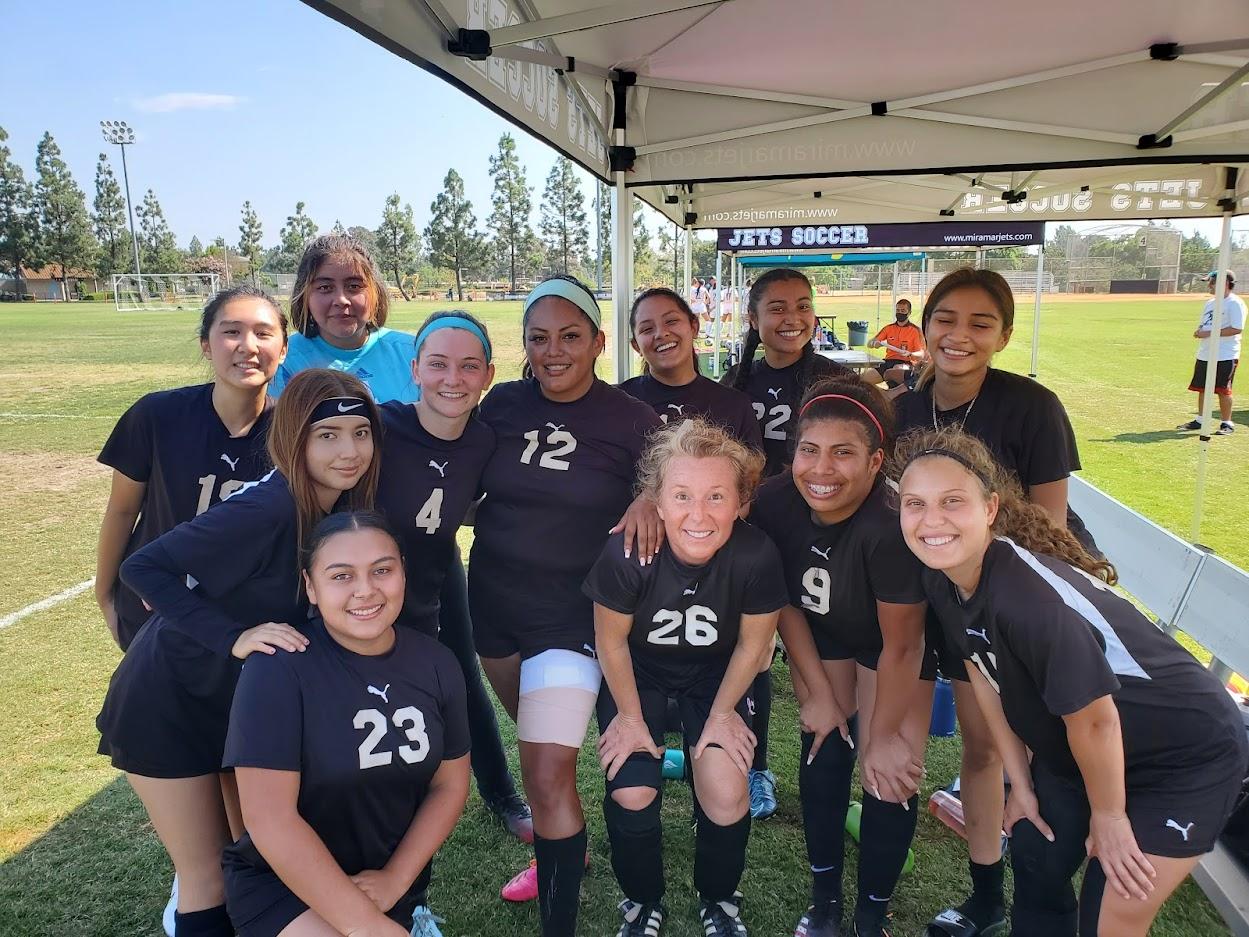