From Marine Corps to Yale Via Miramar College 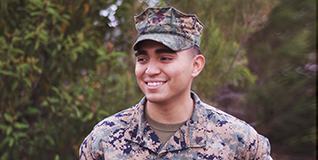 The former Marine Corps corporal is from a family of Honduran immigrants who live and work in Miami as home cleaners and construction workers. While not the first to attend college in his family, he is the first to attend an Ivy League school. “Honestly, I don’t think my mom even knew what Yale was when I first told her that I got in, but my grandmother, who migrated here in the 1960’s, knew and she was very happy,” said Guerra. “My family really struggled when first arriving in America. My acceptance to Yale wasn’t just a testament of their hard work, but also a testament of the American Dream that I served this nation to uphold.”

His road to Yale University was anything but smooth. Guerra admits to neglecting his academics while in high school in Miami, yet he knew he needed to honor his family’s hard work and dedication. “I couldn’t understand my family’s struggle until I graduated high school. I realized that my family came here to better themselves and my grades weren’t doing them any justice. I needed discipline and order in my life, so I joined the Marine Corps, though I always knew I would go back to school.”

Guerra spent the next 5 years in the Marines and while stationed at MCAS Miramar he began taking courses at Miramar College in 2015. Four years later, he graduated with an Associate Degree for Transfer in Communications in May 2019. He applied to UC San Diego, Cal, Columbia, Brown and Yale. After being accepted to all, Yale and the Eli Whitney Students Program offered him the best opportunity. “The financial aid package was the best at Yale. Yale will cover the entire cost of attending, give me free lunches and provide me with a $9,000 a year housing allowance, so I am able to save my GI Bill for use on a Master’s degree.”

Guerra plans to study Anthropology to start at Yale. He hopes to join the Ivy League Veterans Council and use his success to build a platform for other Veterans who want to continue their education. “I want to put out more awareness to other Veterans, because I think they sell themselves short when it comes to education. They often say ‘Well, I will just go to a for-profit college or a local state school’ and while there is nothing wrong with that, if you put in the time and effort to be in the Marine Corps you might as well get the best benefit you can out of it. I want to promote that this narrative is real and is possible.” In addition, Guerra hopes his fellow Veterans will take advantage of the Service to School program, which he credits for his acceptance to Yale. “They are a resource that every Veteran should use when applying to universities. Their website is service2schools-dot-org.”

Guerra looks forward to bumping into Summer Lee someday on the Yale campus.